This is a three part film that touches on subject of the civil war, the civil rights movement, and the steel strikes. The first part refers to Abraham Lincoln's thoughts and involvement in the Civil War.
The second part is documenting African American Life in the Jim Crow South is a major research project into the history of African American life during the age of Jim Crow, roughly the period from the 1890s to the 1950s. The Jim Crow era was a time of undeniable oppression and exploitation of black Americans.However, these sixty years of legal segregation in the American South also represented a time when African Americans made monumental efforts to build their own communities and institutions, resisted discrimination in ways large and small despite personal risk, and put their ineluctable mark on American culture.
The third refers to the steel strikes that was happening during the time of the opera called the Cradle of Rock (1937).

The Humanities Council of Washington, DC has the right to display and distribute materials funded by HCWDC grants.
Contact the item creator for reproduction rights. 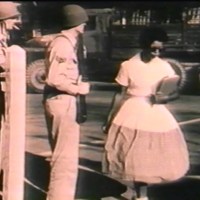