Owners and waitresses of Sherrill's Restaurant and Bakery, a down-home gathering place behind the Capitol, observed Washington and its denizens from the Depression until its closing in 2000. Fine Food captures moments during a typical day in the very un-Washington Capitol Hill hang out, conveying the role of the eatery in the neighborhood as patrons discuss local history and politics.

This film was nominated for Best Documentary Short at the 1989 Academy Awards.

Nominated for an Academy Award in Best Documentary Short Subject, Fine Food, Fine Pastries, Open 6 to 9, was a first place winner in the American, Atlanta, National Educational, and Houston Film Festivals among many others; and won a CINE Golden Eagle and Emmy Award.

Copyright 1988 David Petersen
The Humanities Council of Washington, DC has the right to display and distribute materials funded by HCWDC grants.
Contact the item creator for reproduction rights. 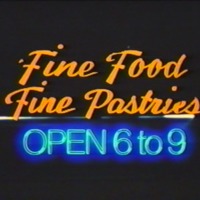