This film provides several historical vignettes on the lives of ordinary citizens who lived in Washington, DC's downtown from the city's founding through the end of the 19th century.

Topics covered include: the history of health and medicine, the assassination of Abraham Lincoln, life in the city's boarding houses, and nightlife entertainment.

The City Museum of Washington, DC 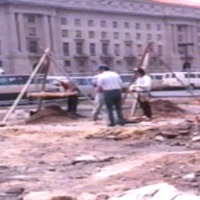