During 1968, the Poor People's campaign gathered at the National Mall to create Resurrection City, an encampment which lasted for forty days. Their goal was to raise awareness of the unfair wealth distribution within the United States.
As a part of Resurrection City, the Soul Tent, a triangular shelter, was erected. There, people were able to listen to music, discuss problems within their community, and engage in activism.
In 2018, in an attempt to bring attention to the relatively unknown history of the Poor People's Campaign, a new Soul Tent was created by the DC Public Library. This presentation highlights the cultural significance of the Soul Tent and details the places it traveled and how people interacted with it.

This work is licensed under a Creative Commons Attribution-NonCommercial 4.0 International License. 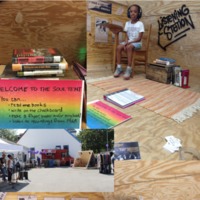 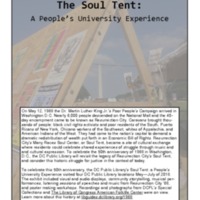