Dancing Through the Flames: How the DC Dance Culture Survived 1968

Dancing Through the Flames: How the DC Dance Culture Survived 1968

This documentary outlines the dancing show "Teenarama", which ran from 1963-1970. Black teenagers were able to dance on television, which provided positive, well-mannered, and fun-loving examples of African-American people. Dancers from "Teenarama" in 1968 recount their experiences on the show following the death of Martin Luther King Jr.
At the time, Washington, DC was wrought with political turmoil as uprisings emerged throughout the city. Media sources often utilized the riots to villainize African-American citizens, and for many young black people, they had little to no positive representation on television or in popular media. "Teenarama" served as a positive outlet for marginalized teens to dance and enjoy themselves while also allowing black viewers to feel positively represented in popular media. 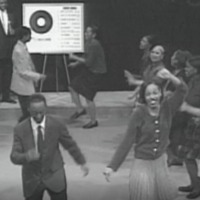