Photo of Washington, D.C. Girl Scouts at a Protest

Photo of Washington, D.C. Girl Scouts at a Protest

This is a photo taken by Irene Stewart Kellogg of Princess Mae Richardson and two young girl scouts. They were at a protest against the closing of the 12th street YMCA. The photo was taken at 12th and S Streets NW.

The back side of this photo biographical information about Richardson is written. It explains that in addition to leading girl scouts, Richardson was a Jazz harpist, and teacher of voice, choir, piano, and organ. She was trained at Miners Teacher College in Boston, MA, the Boston Conservatory of Music, and the New England Conservatory of Music. She has been described as "minister of music" for Baptist, Methodist, Episcopal, and Presbyterian churches. Her father was Dr. Richard Richardson (1865-1937) and mother was Mae Jones Richardson (1870-1953).

Photo of Washington, D.C. Girl Scouts at a Protest is licensed under a Creative Commons Attribution-NonCommercial-ShareAlike 4.0 International License. 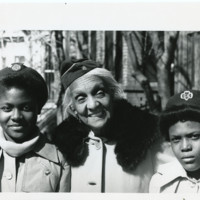 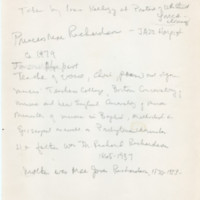