Miriam Rivkin was a Women's Auxiliary Air Corps recruit in 1943. Rivkin was born on July 22, 1922 in Tulsa, Oklahoma, and served in the military for two years where she worked as a photographer in India.

Here Rivkin is depicted with one of the cameras she used while working near the Hastings Jute Mill in India on the Hooghly River, a tributary of the Ganges. The handwritten caption reads, "Don't forget to pull the dark slide." 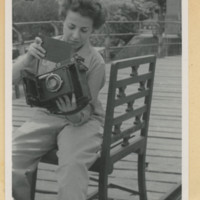