Sketch of a soldier prepared for a sinking ship

Sketch of a soldier prepared for a sinking ship

Miriam Rivkin was a Women's Auxiliary Air Corps recruit in 1943. Rivkin was born on July 22, 1922 in Tulsa, Oklahoma, and served in the military for two years where she worked as a photographer in India.

Also an accomplished sketch artist, Rivkin drew this cartoon which, in her words is, "[m]aking fun of soldiers and what they were supposed to grab in the case of evacuation." The typed caption on the drawing reads, "DOG-TAGS, HOBBY-HAT, PAY-BOOK... LET 'ER SINK!" The written caption below the drawing reads, "35 days aboard the General A.E. Anderson." 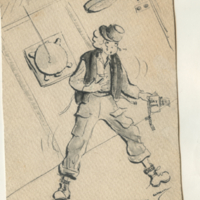