Matthews Memorial’s missionary work is led by the leaders of the John T Marshall Missionary Society. In 1940, the John T. Marshall Missionary Society was organized by Pastor C. Howard Hickerson, in honor of our Founding Pastor John T. Marshall who had served from 1921 until his passing in 1938. This silver plate was won in a 1983 competition. At that time, Marshall Society President Dorothy M. Jones, who served in that role for 37 years, led an active program that saw MMBC missionaries participate in local and national missionary conventions for Foreign Missions. More recently the Marshall Society sent a shipment of school supplies for children in Uganda and Kenya.

Marian Nembhar sent the Prayer Letter in April 2012 as a greeting from Burkina Faso where she served as a missionary. She is seen in the photo teaching a Children’s Ministry class. Nembhard was a missionary at Matthews Memorial for many years, and she later pursued full training and certification to serve as a missionary abroad in Burkina Faso. In the summer of 2012, the JTM Missionary Society sent her a shipment of yarn to help advance her program of teaching some women to crochet, as an extension of her literacy reading and writing classes for them. 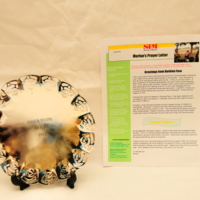