This panel discussion featuring representatives from three prominent U Street businesses and was moderated by Blair Ruble, author of Washington's U Street: a Biography. The panelists were Nizam Ali of Ben's Chili Bowl, Richard Lee of Lee's Flower and Card Shop, and Suman Sorg of Sorg Architects.

Ali and Lee discussed the changes that swept U Street during the latter half of the 20th century including desegregation, the 1968 riots, and the construction of the metro station. Sorg is a relative newcomer to the area, and she discussed her efforts to ingratiate her enterprise into the local business community.

The program was held on May 19, 2011 at the home of Gregory Jefferson, Sr. in Shepherd Park. 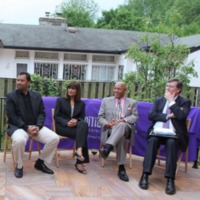