This film documents a series of street performances produced by Alliance Francaise. The event was based on Régis Jauffret's Microfictions, a work that colorfully portrays several dramatic scenes in writing.

The event was also based on the Paris Nuit Blanche, an annual city-wide arts festival that lasts through the night. Events were held in 10 different locations, but primarily took place around the Anacostia Historic District on May 15th, 2010 and Dupont Circle on May 16th.

Contains both a short and long version. 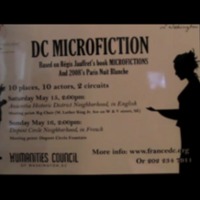